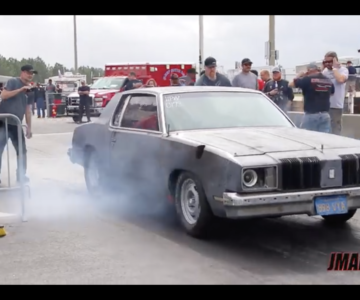 Not much in the form of details has been released so far. He was said to have been involved in a wreck with Chucky Davis in a Fox-Body Mustang (as seen in the pics). The ‘Crow’ may be gone but no matter what, we hope everyone is ok.

“(Photographer unknown at this time) Details are sketchy at this time but photos have emerged showing the 1972 LeMans of Justin Shearer, known as “Big Chief” on television’s Street Outlaws as being absolutely destroyed after a crash with a Fox Mustang driven by Chucky Davis.

“THANK YOU EVERYONE…. I’m pretty beat up right now. Just woke me up for some breathing treatments. Pulmonary contusions (bruised lungs). Crushed my L2 and L3 in my back, broken collarbone, and pretty beat up, but so thankful to be alive right now. They got me on non stop oxygen and another round of cat scans, and X-rays coming up. The surgeon doesn’t believe i will need back operation anymore, but they are going to keep me in the hospital again tonight to keep an eye on the lungs, YES I WILL BE BACK! The GOFUND ME CAMPAIGNS were not created by my people or family… I have no idea about them, please KEEP YOUR MONEY. I will update everyone as i get info from the Doctors! The CAGE and safety equipment saved my life!” The Crow 405