Check out the new 2016 Corvette ZO6 C7R featured at the Chicago Auto Show!

Experience is very important when it comes to drag racing in terms of getting a car to ‘hook n book’ down the track.

“C7 Z06 gets the Driver Mod. On September 26, 2015, we posted a video of a C7 Z06 that lost to a GT-R in a drag race because the Z06 driver had difficulty getting the car to hook. We figured there would be a backlash of criticism because everyone thinks they are skilled drag racers. In any event, we put a disclaimer in the original video stating we can’t be responsible for the times of the cars if we are not driving. That said, the Z06 owner contacted us and was cool enough to throw us the keys and let us drive. The car is a 2015 Z06 with pulley and tune. The Z06 has stock Michelin Pilot Super Sports and the track was a little slippery. Due to poor track conditions (Test & Tune night with everyone dragging water to the line), our driver came out of the hole soft without loading the converter to avoid a smoke show. With drag radials and a better DA, this particular Z06 should run 10.20’s. Hope you enjoy the before and after.

FYI – The C7 Corvette Z06 is powered by a 6.2 liter Supercharged V8 that makes 650 horsepower when stock and is shifted by an 8 speed automatic transmission. Enjoy !!” 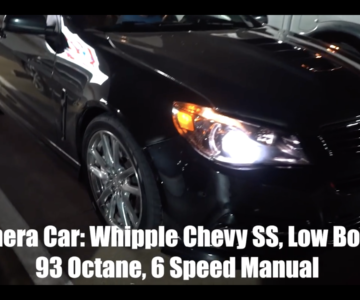 Watch this Whipple blown Chevy SS give out all the free smoke on the streets of Mexico (Texas)!

“This Whipple Chevy SS gets down with whatever lines up! We got some awesome runs and some really sick out of town cars showed up. We also found the coolest cop ever! Enjoy guys!”